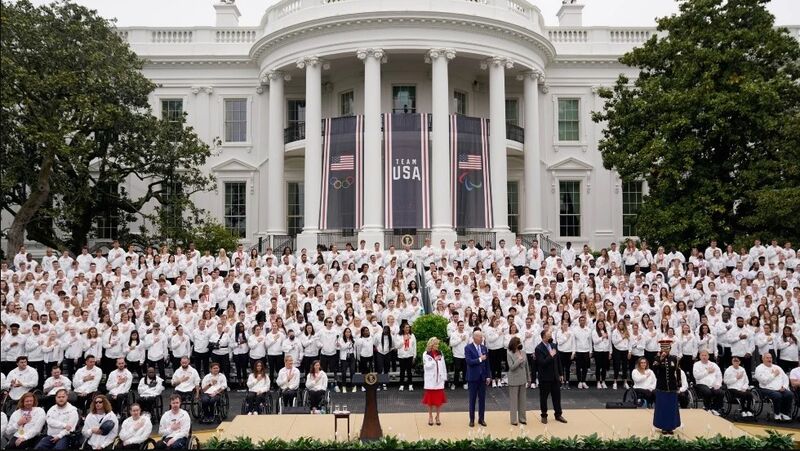 Summary
I had the opportunity to visit the White House as a part of a celebration week for Team USA athletes who competed at the most recent Games. I provide my observations on how well access was considered and provided throughout the event.

Traditionally after Olympic and Paralympic Games, the athletes who had participated in those Games would always be invited to visit the White House in the fall, but that did not happen last year due to COVID. I fully expected the tradition to be skipped over as part of the new way of the world at this stage of the pandemic. To my surprise, in April I received an email invitation to gather in Washington DC as the White Visit had been organized after all.  Notably, it was the only time that Olympic and Paralympic athletes from both the Summer and Winter Games had congregated in one place at one time. This was because the Summer Games were delayed for 1 year and the Winter Games were not, leaving just 6 months between the two events. With 2 Paralympic Teams invited, of course there were major access demands.

I estimate the total number of wheelchair users at the event to have been around 40 people. The White House itself was remarkably accessible. The ramp leading to the entrance was long and not overly steep. It was also constructed in a way that did not draw your attention to the fact that the ramp was there. I do admit that just being at the White House might have drawn my attention more than the average building. Every once in a while, I hear from an architect that their client doesn’t want a ramped entrance to a building because of how it looks. It’s an easier task in new construction than in an existing building, since access is usually an afterthought, and a ramp is the easiest way to provide access. It was nice to see that access can be provided at a historic building’s entrance without being overt or distracting from the overall aesthetic.

As a federal building, the White House is also not subject to the access requirements of the ADA, but rather the Rehab Act. The White House itself is a very interesting historic building. It is around 230 years old and there are many historic pieces and spaces within. It is also a building that is still in use and has been modernized to fit the needs of the Executive branch. I point this out to demonstrate that just being old, in and of itself, doesn’t necessarily mean everything within it carries historic significance. Under the ADA, only when a proposed modification for access might threaten to destroy the historic significance of a building that access itself may be questioned or modified.

It’s easy to just say that increasing the access of a historic building would take away from the experience of visiting that building. Allow me to give you an example that I hope will highlight how absurd that notion is. Many historic buildings offer tours. Many historic buildings were also built in a period of time prior to modern plumbing. Does putting in modern plumbing take away from the historic experience of an older building? Shouldn’t everyone have to relieve themselves in a pit dug into an outhouse? Providing toilet paper would surely destroy the historic experience as well. Historic buildings have different purposes for when they were first constructed and should be modified to suit the needs of the present. Just as modern plumbing is a necessity, so too is access. If the point of an historic building is to have people visit it to learn about the building, it should be modified to allow as many people as possible to learn about the building. Incidentally, the restroom within the White House for use by the tour was fully wheelchair accessible.

I was very impressed by the organizers of the celebration experience. All the athletes stayed at one hotel, and we were all bussed to the White House. A Gala was organized within the hotel the evening prior to the White House Visit, and a buffet-style breakfast each morning. They did an extremely good job of organizing these events accessibly. Finding a hotel capable of meeting the needs of so many athletes with disabilities is no easy task. Organizing transportation for so many wheelchair users is also nowhere near as straight forward as transporting a large group of ambulatory people. From what I could tell, transporting everyone was done very well, with every wheelchair user’s needs accounted for with a specific bus and schedule for every athlete. The demand for access at this event was substantial and more than typical, so you might forgive either the USOPC event organizers or the White House facilities staff for some form of short coming, but for my trained eye they both performed admirably in providing integrated independent access for all the athletes in attendance.