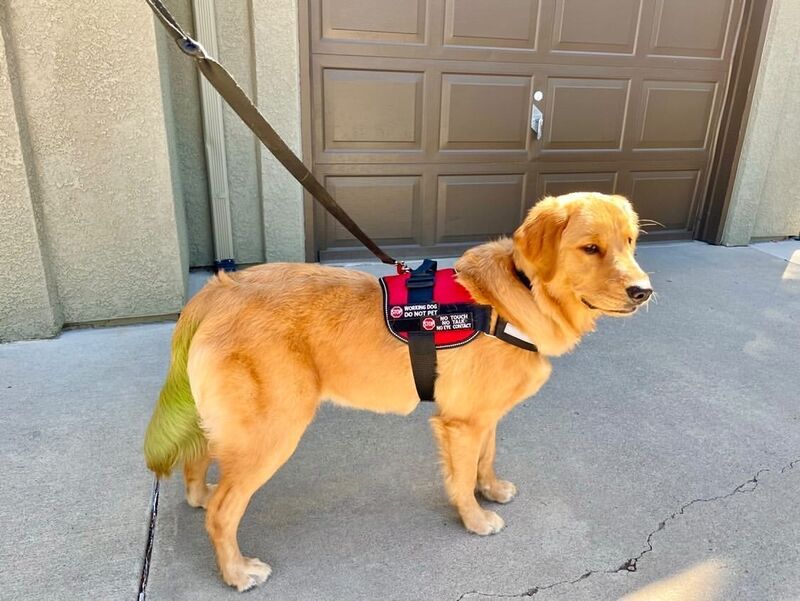 Summary
Hannah Cory shares her journey training her service dog, Bailey, and what others should know when it comes to respecting service animals and their handlers.

At the Rocky Mountain ADA Center, we often train people on what the ADA says about service animals and how to show respect toward these animals and their handlers. Recently, I was browsing Facebook, and I came upon a post by my friend, Hannah Cory. In the post, Hannah was spreading awareness on service animal etiquette after regularly experiencing behaviors from others that interfered with her dog’s training and work. This post was a good reminder that service animal etiquette is not universally known, and this lack of awareness makes it more difficult for people with disabilities to equally enjoy public life.

Hannah lives in Colorado Springs with her husband, Greyson. After Greyson was diagnosed with epilepsy, they applied to several organizations that train and provide service animals. They knew the waitlists for these animals were long, but after receiving no responses from the organizations, they decided to take matters into their own hands. In November 2021, they added Bailey to their family.

Bailey is a golden retriever puppy who the Corys are training as a medical alert and response dog for Greyson. Their goal is for Bailey to detect when Greyson is about to have a seizure by his scent changes, alert Greyson to lay down in a safe position, alert Hannah or find help from others close by, and ensure Greyson stays in a safe position during seizures. Bailey’s also learning to retrieve medication, water, and other essential items for Greyson. That’s one helpful pup!

Hannah performs much of Bailey’s training and receives help from professionals at Dog Training Elite. Dog Training Elite is the second organization the Corys have sought services from. In an interview with Hannah, she said one of the most important and challenging pieces of training a service dog is finding the right trainer whom you can trust. This can be a process of trial and error. As Hannah suggested, “If you feel like your trainer is not appropriate with your dog or not stern enough, or just that you’re not making progress, don’t be afraid to leave the trainer. That’s what we had to do, and we’ve seen ten times the amount of progress since leaving.”

When it comes to training Bailey, another challenge Hannah expressed was “understanding that she’s a puppy, and she’s not going to understand everything. Teaching Bailey things that are not innate is a big struggle.” Teaching dogs to avoid other people in public, heel for the entirety of a walk, and ignore loud noises is no easy task.

However, one of the most frustrating challenges Hannah has faced in training Bailey is unawareness from others on how to act around service animals. Most of the time, people don’t have bad intentions when they approach, talk to, or pet service animals without asking, but this causes major barriers for both the animals and, more importantly, the animals’ handlers. Service animals are trained for essential and often lifesaving tasks, so it is imperative they have space to do their jobs with as few distractions as possible.

Hannah said service animals should be viewed as medical extensions of their handlers. If you see a dog accompanying someone in a public setting, there’s a good chance it’s a service animal, and you should refrain from distracting the dog or its handler. Although it’s not required under the ADA, service dogs often wear vests that instruct people how to act around them. When you see a message on one of these vests, adhere to it. As Hannah said, “People often look for excuses to come up and talk to service dogs and their handlers. Just read their vests. Their vests often say, ‘Do not approach, do not talk to us.’ It’s just a respect thing.” Hannah has also found that after putting a bumper sticker on her car stating, “Service dog on board, please don’t tailgate,” she has received more courtesy from other drivers.

When I asked Hannah what advice she has for other people training service animals, she said, “There are going to be good days, and there are going to be bad days. You’re going to train your dog, and then they’re going to revert to old habits. It takes two years on average [to train a service animal] for a reason. That shows that there’s going to be a lot of recoil, and I’m going to have to correct. It’s good for people to know that it’s normal for your dog to have bad days, and it’s normal for your dog to miss a medical alert. They’re dogs, and you have to be patient with them. That’s something I wish someone would have told me, because I didn’t realize how difficult it is to train a service dog and how time consuming it is. People do this as a full-time job for a reason.”