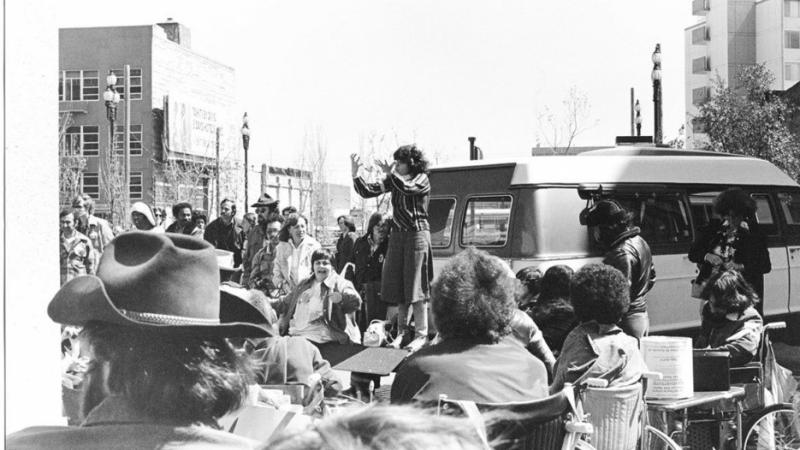 Before the Civil Rights Act of 1964 was signed into law, discrimination against people who were “different” from the “norm” was rife. One may ask, what was the norm in the United States? On July 4, 1776, in the Declaration of Independence, it was declared “that all men are created equal, that they are endowed by their Creator with certain unalienable Rights, that among these are Life, Liberty and the pursuit of Happiness.” Life in the United States was anything but equal as could be seen by the number of slaves owned by the landed gentry; by the relegation of native Americans to reservations on the periphery of mainstream American life; the lack of voting rights of more than half of the populace who were born female; the disabled were barely tolerated as long as they were male and their disability was invisible.

It was not to be for “four score and seven years” more until President Abraham Lincoln gave his Gettysburg Address on November 19, 1863 when he affirmed that the goal of the Civil war was to unite the United States and to abolish slavery. However, the abolition of slavery just led to the rise of the Jim Crow laws, which are regulations that legalized racial segregation on local and state levels.

Several other unpalatable events were foisted on minorities and those who were not White or Male. One of what may be the most egregious events could be the purposely overlooked “Trail of Tears” where approximately 60,000 Native Americans in the Southeastern United States were forced to relocate to what was designated as Indian territory, west of the Mississippi River. These Choctaw, Chickasaw, Seminole, Creek and Cherokee people were forced to walk on what these people came to call the “Trail of Tears” because of the high number of people who died on this journey between 1838 and 1839.

Cosmetical attempts were made to redress this blatant and inconsistent application of the immortal words of “all men are created equal” in the declaration of independence that most Americans celebrate annually on July 4. Such attempts were the Civil Rights Act of 1866 which supposedly guaranteed equal rights under law for all people who lived in the United States. In 1868, the Fourteenth Amendment to the U.S. Constitution was passed and this amendment granted citizenship to all people born or naturalized in the United States and prohibited states from denying any person the equal protection of the laws. The fourteenth amendment also prohibited the deprivation of life, liberty, or property to any person without the due process of law. The Fifteenth Amendment to the U.S. Constitution as passed in 1870 specifically granted African American men the right to vote.

The Civil Rights Act of 1875 guaranteed African Americans equal treatment in public accommodations, public transportation, and prohibited their exclusion from jury service. However, in 1883, the U.S. Supreme Court declared that some parts of the Civil Rights Act of 1875 were unconstitutional, especially with regard to inns, public conveyances, and places of public amusement. The Plessey v. Ferguson trial in Louisiana could be regarded as the start of the “Separate but Equal” era of segregation.

One of the earliest disability legislation on the Federal level is most likely to be the grant of 23,000 acres of land in Alabama to what became known as the American School for the Deaf in 1817. The American Civil War between 1861 and 1865 resulted in disabled veterans seeking protection and rehabilitation assistance from the government. The invalid corps (a.k.a. Veteran Reserve Corps) were established in 1863 that allowed partially disabled or veteran soldiers to perform light duty to allow able-bodied soldiers to serve on the front lines.

Other significant pieces of federal legislation with regard to disability include the “ugly laws” passed by several local ordinances and even some states which made it illegal for certain persons who are deformed, unsightly, or considered to be “disgusting objects” to appear in public from as early as 1867 in San Francisco to as recently as 1979 in New Orleans. Often, “ugly laws” applied to people with disabilities and many resulted in punitive measures ranging from fines to imprisonment and/or forced sterilizations. The “ugly laws” started to be one of the targets of disability activism in the 1970s which led to its eventual dissolution.

The first world war produced a number of legislative acts by the U.S. Federal government which included:

1917 — The Smith-Hughes Act established the Federal-State Program in vocational education which allowed for the vocational rehabilitation of disabled veterans;

1918 — The Smith-Sears Veterans Rehabilitation Act allowed for vocational rehabilitation and support for the re-employment of disabled soldiers discharged from the U.S. military;

Other than the legislation passed above, not much attention was given to civil rights for disabled persons. The Civil Rights Act of 1964 did not include disability as a basis for discrimination until 9 years later when the Rehabilitation Act was passed. Even with this Act in place, no regulations were issued between 1973 and 1977. This was when the American Coalition of Citizens with Disabilities (ACCD), a national cross disability organization, was formed to get regulations for the Rehabilitation Act in effect.

Frank Bowe was born in Danville, Pennsylvania on March 29, 1947. When Frank was 3 years old, he became critically ill with measles and was given the antibiotic streptomycin, which is suspected to be the reason that Frank became Deaf. Frank obtained his BA degree from Western Maryland College followed by his MA degree from Gallaudet College. Frank then started to teach “children with disabilities and to teach others how to teach them” (Unknown, 2009). In 1976, Frank received his Ph.D from New York University.

In 1977, Dr. Bowe was the founding director of the American Coalition of Citizens with Disabilities (ACCD) and led a number of protests throughout the United States. These protests focused attention on the plight of the handicapped and forced the implementation of the Rehabilitation Act of 1973. Bowe’s Disability Rights Movement activism leadership in organizing nationwide sit-ins earned him the label “Father of Section 504.”

Bowe also published his first book, Handicapping America: Barriers to Disabled People, in 1978. In his book, Bowe explained that disability is a societal construction rather than an individual condition. Societies could either disable or enable people by either maintaining discriminatory barriers or ending them. In 1980 Dr. Bowe was also the first person with a disability to be part of any nation in the planning of the United Nations International Year of the Disabled Persons. It is worthwhile to mention here that Dr. Bowe also led a Federal investigation into the state of Deaf education in the United States at that time. Dr. Bowe then compiled a report to the President and the Congress of the United States in 1988. This Towards Equality: Education of the Deaf report was intended to be a follow-up to the Babbidge Report on the Education of the Deaf that was published in 1965. These reports examined why education for Deaf children was not performing satisfactorily.

In 1989, Dr. Frank Bowe became part of the Hofstra University faculty in Long Island, New York. Dr. Bowe was the Dr. Mervin Livingston Schloss Distinguished Professor for the Study of Disabilities at the time of his death in 2007 according to his obituary in the New York Times. The Rehabilitation Act of 1973 was originally passed to allow for “handicapped individuals” to be employed. Section 504, as a result of Dr. Frank Bowe’s activism, became the world’s first civil rights provision for persons with disabilities.

The Fight Continues, a blog on Dr. Frank Bowe, and his earlier blog - The Disabled States of America by Mike Mort from September 2015 are worth reading. 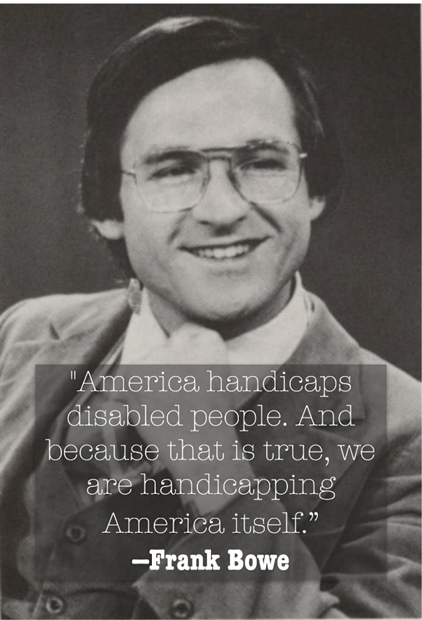