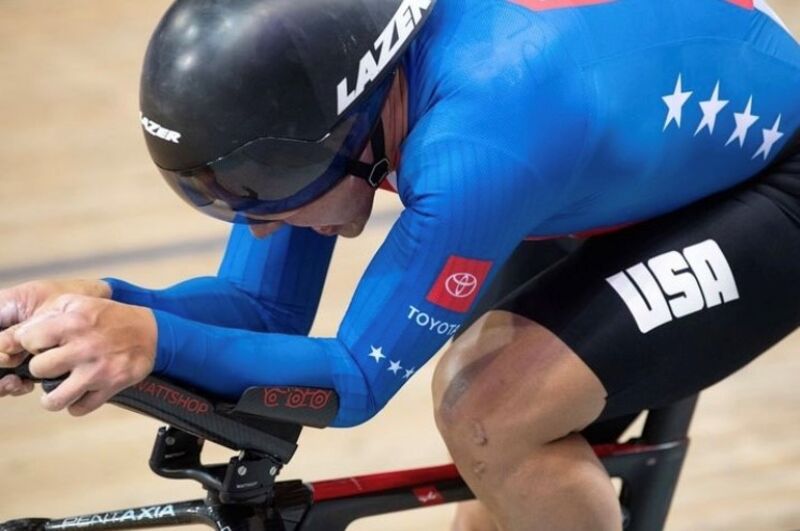 Summary
A short recap of my trip to Paris to compete at the Paracycling World Championships.

I just returned home from France, and I have quite a bit to unpack from my trip! I had the opportunity to represent Team USA again at the 2022 UCI Paracycling Track World Championship held in Saint Quinten en Yvelines, just outside of Paris. I’ve traveled all over the world, but this was my first time in France.

My first impression was of the airport. I landed in Charles De Gaul. The accessibility seemed on par with what I would expect from any major American Airport. I was not as impressed about the general access as I was when I traveled to Japan. The terminal itself was very crowded, which is a people management problem that disproportionately affects people with disabilities. People departing and arriving were all funneled through the same entrance/exit of the terminal. I believe the design is simply outdated.

When we arrived at the hotel, one of the first people I saw from the shuttle was a random citizen using a wheelchair. This man had an interesting device attached to his chair that I only have seen in Europe. He was using a normal looking manual wheelchair; except he had handlebars attached to a front-center wheel between his feet. This device was anchored to the base of his chair. I’ve seen these before and it looks to be a method to convert a manual chair into a power chair. The drive for the device powered through the front wheel. It seems like a practical solution for a place in the world known for its tight spaces. While traveling, I notice a good way to get a general idea of the accessibility of an area is by how visible people with disabilities are in that place. Incidentally I did not see anyone with an obvious disability when I explored Paris after racing.

The racing itself went well. I placed 2nd in my target individual event, the 1 Kilometer Time Trial. I had actually won the qualifying heat but was only 2nd fastest in the final. We had never had a qualifier and final before, so strategizing was a new aspect. An observation I had was that individuals who did well in this format generally have much greater access to training facilities and resources, which I found as an interesting to parallel accessibility. The takeaway is that when you have greater access you have greater opportunity to succeed. The people with greater access to training facilities had more opportunities to fine-tune a pacing strategy, to just do enough to get to the final round without using too much energy. In the US, we have limited opportunity to train on a world-class velodrome, so we don’t really have the ability to fine-tune such an approach. I raced hard both times because it was risky trying to skate into the final without practicing. After mulling the idea of access and success around in my head after racing, it did get me wondering how much more successful people with disabilities could be if the world was really setup for them to have equitable opportunity. That is the goal of the ADA and I really hope we get there one day, but I realize we are not there yet. Going back to the racing, I was disappointed not to win, but I am proud of my 2nd place. I am proud of my performance to have ridden the fastest time of the day and to have made big improvements to my craft.

I am extremely biased, but I think paracycling is a great sport to watch. There are so many great athletes who have disabilities that make you wonder how their performance was possible. If you’ve ever felt unsure of how to articulate appreciation for people with disabilities that you think are amazing my advice is to continue to focus on people-first language. Shota Kawamoto from Japan rode an incredible 3 minute and 31 second 3-kilometer individual pursuit, and he did it with one leg. I don’t think I’ve ever ridden a 3:31 3K. I have a huge respect for anyone who can ride a 3:31 3K and doing that with 1 leg is even more incredible. It’s OK to have this admiration or even feel inspired by these kinds of accomplishments. Just understand these people are not trying to be inspiring. Be inspired by them for pursuing their passions as you would for anyone else who impresses you.

Overall, I had a great experience in France. I grew closer to my teammates and competitors. I expressed the hard work I have been putting into racing my bike. I got to see a little bit of a famous city I had never been to.  I know I will be back to Paris at some point. I hope that will be in 2024 as part of the US delegation for the next Paralympic Games. Similarly with increasing accessibility, I just need to keep chipping away day after day until I reach my goals.

I want to wrap up by thanking the people involved in the Rocky Mountain ADA Center for their unwavering support in my paralympic journey. Just as I could not be competitive without my support staff in cycling, I could not pursue cycling without being surrounded by good people who care about the work they do and the people they work with. I am affected by the energy I am surrounded by and I can thrive in my work environment every day with such an incredible team.