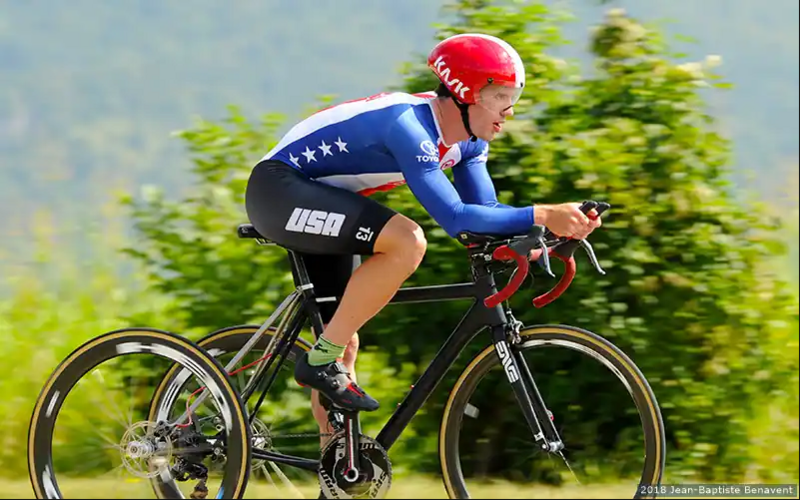 Summary
An interview with Ryan Boyle.

Ryan Boyle is one of the most fun people I am happy to call a friend. He has a quick sense of humor, an infectious laughter, and a diverse range of interests. There’s not a lot Ryan isn’t willing to try, but he’s especially fond of fast cars, being outdoors, playing piano, playing video games, and cooking. He’s a very active young man in his mid-twenties. Ryan has also been a member of the Paralympic Cycling Team for several years, with his highest achievements being a silver medal at the 2016 Rio Paralympic Games, his first ever gold medal at a World Cup in 2017, winning the World Championships in 2 events in 2019, and defending his gold medal in the road race of the 2019 edition of the world championships.

Ryan rides in the T2 category. The “T” stands for “Trike.” These trikes are usually converted road bikes to accept two wheels in the rear of the bike to form a stable platform. These bikes are necessary for people who have balance issues severe enough to preclude balancing on 2 wheels. Ataxia is the medical term for Ryan’s condition, which more or less means that when his brain sends a signal to his muscles, his muscles do something different. This makes movements spastic and sporadic.

Ryan’s life with disability began at the beginning of fourth grade. While riding a big wheel toy bike at a friend’s birthday party, Ryan was struck by a speeding pickup truck. The collision hit him in the back of his head, crushing his skull into his cerebellum. He had immediate brain surgery which removed a large part of the cerebellum, which is the part of the brain responsible for balance control. The neurosurgeon told his parents that he didn’t have much of a chance of surviving.

Ryan spent the next 2 months in a coma, with his condition touch and go the entire time. While unconscious, he did show some positive signs, such as a half-smile from time to time. When Ryan woke up from his coma, the only movement he had was in his right index finger. His doctors were optimistic that he would gain enough strength one day to type with his right hand.

It took Ryan about 8 years of his life in various rehab facilities to reach a point of functional equilibrium in how he is able to live now. He began swimming as part of his recovery program, which evolved into recreation, then into competitive swimming. Although a strong swimmer, Ryan was presented with an opportunity to try riding a bike and he found a new love.

Ryan is a wheelchair user, but he can walk. Walking can be tiring and/or dangerous, given his balance control, but is also important for health and quality of life. He will choose whether to use his wheelchair or to walk with the aid of crutches for different reasons. If he wants to stay safe and conserve energy, he will opt for the wheelchair. If he’s not time crunched and the distance isn’t too far, he’ll opt to walk because he can stretch his legs and it’s just generally easier to get around. When asked, he did agree that public access has generally improved throughout his life, with more ramps and automatic doors being more available than they once were. I then asked him what he thought could be improved. He responded the desire to have access to more automatic doors, for accessible elements to be properly maintained to be usable, and generally for integrated independent access to be the standard. Being a world traveler, he does admit that access is much better in the US than in Europe.

Being involved in the accident which caused his disability at such a young age, Ryan does believe the experience has shaped his personality into what it is today. He’s more philosophical, tries to not take things for granted more often, and is more outgoing than he used to be. He shared that in his experience, people are more apt to be your friend when you are able, but that they tend to go away when you’re in a wheelchair. The friends who did stick with him through his recovery, Ryan regards as his real friends. The accident made him think “why me? Why was I spared?” He views life as a gift and is more inclined to slow down and smell the roses, to appreciate the present moment.

“When The Lights Go Out, A Boy Given A Second Chance” is a book Ryan has authored about his experiences. I suggest checking it out as his story from the accident to Paralympic achievement is so much more involved than I can do justice to summarize here.

I asked Ryan for parting words that helped him become who he is:

"Believe in yourself. Never take 'no' for an answer. Don’t accept anyone saying that 'you can’t' or 'you won’t.' It’s up to you and the work you put in. You make your own life. Don’t stay stagnant in life, always keep moving."