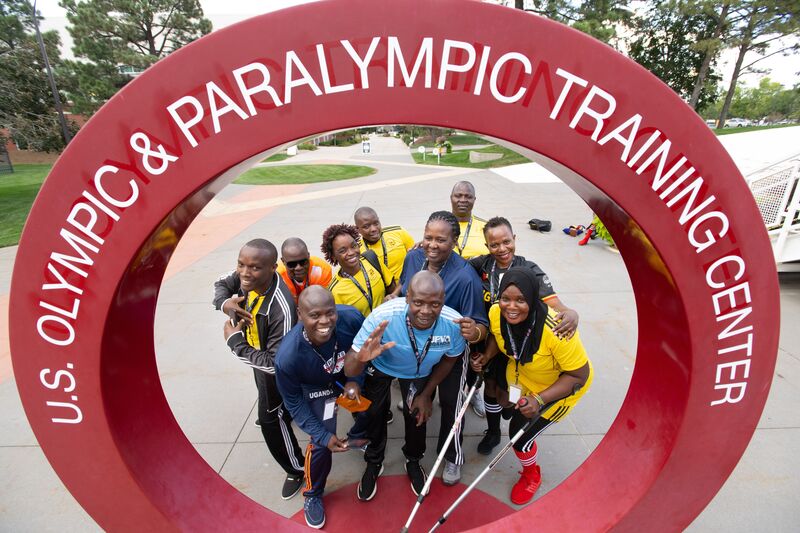 Summary
I participated in a Q&A with visitors from Uganda. Today's post highlights some of the more interesting topics of our conversation.

Recently I had the opportunity to co-present a training on the ADA to a group of coaches and administrators from Uganda. The training request was not the most specific, but we understood that the visitors wanted to understand how the ADA was structured and what lessons they could learn to bring back to their country. We have participated in trainings similar to this in the past, so I was very excited to understand what the point of view was like for people from a different part of the world. Tess led the way for the prepared training, and I sat in to help field questions from our guests. I want to highlight some of the more interesting parts of our conversation.

It did not take very long until this group started asking questions about the ADA. I believe Tess got through 2 and a half slides! One of the first questions that came up was if the ADA had any affirmative action provisions. In Uganda, a person with a disability might score lower on an aptitude test because their disability prevented them from reflecting their true aptitude and scores that were lower than acceptable from the general population may be considered because of their disability. I thought this was a very interesting solution to an identified problem. I responded that the ADA is not an affirmative action law and that normal standards of excellence were not required to be lowered for people with disabilities. I then explained that the ADA would require that the barriers to performing on the test be identified and accommodated for within reason so the person taking the test can have an equal opportunity to demonstrate their aptitude.

The question was asked “How do people know their rights under the ADA?” That was an extremely good question! I didn’t exactly have a good answer. I personally wasn’t aware of the ADA until well into my thirties. The only response I could come up with is that the ADA applies to covered entities, being employers, state and local governments, places of public accommodation, and telecommunications; and the adage that ignorance of the law is no excuse not to obey the law. I do see a need for more people with disabilities to be aware of their rights under the ADA. That’s exactly why the ADA Centers exist, as a resource to explain the law informally. But how to bring about widespread awareness? I wish I knew! I try to do a small part in my personal life to make awareness of the ADA more accessible. I belong to a few Facebook groups that are organized around my specific disability. Whenever I read a post about a situation where it sounds like the ADA applies, I chime in with the recommendation to contact their regional ADA Center. Just like the full implementation of the ADA, general awareness has a long way to go.

Speaking of implementation, that was another great question that was asked. General awareness would do quite a bit to get the ADA implemented more fully. I explained that as far as physical accessibility goes, the harmonization with building code is the leading factor in getting the access requirements of the ADA implemented into the real world. Building code officials cannot enforce the ADA, but they can enforce building code. A lot of the ADA Standards are harmonized with the International Building Code. This gets us most of the way there for physical access. However, since the ADA is a civil rights law and building code is predominantly concerned with safety, there are a few areas that do not overlap. A prime example is that a mirror provided in a restroom has requirements to be usable by people with disabilities in the ADA Standards. As this is not a safety issue, it is not part of the building code. The other method the ADA is implemented is through the ADA Coordinators that the law requires of Title II entities with 50 or more employees. The main role of the ADA Coordinator is to ensure that the entity is complying with the ADA. While not every entity which is large enough to need an ADAC has one, more of these positions are being created every day. These are the people doing the bulk of the implementation work behind the scenes in a community.

I am hopeful some of these ideas can help our visitors create a more accessible environment in their own communities. I hope they can learn from the mistakes that our country has made. I hope they can help implement accessibly correctly the first time in areas that are largely not independently usable by people with disabilities.